News is full of cool technologies like drones, blockchains or autonomous cars and their disruptive character. Traditional firms have switched to innovation mode and have now cool digital transformation units to use these new technologies. Everybody is happy. Great, isn’t it?
Or wait? Can this really work that easy?

END_OF_DOCUMENT_TOKEN_TO_BE_REPLACED

When I joined Microsoft in 1993 my decision to do so was stimulated by the picture I had from Bill Gates as a visionary leader. The company’s mission Bill Gates created at that time was “A computer on every desk and in every home”. It was an aspirational vision and motivating target for the scorecards. Would Microsoft be the same company today if the mission would never have existed and Bill Gates visions would have not influenced the product and research agenda in the way he did?

END_OF_DOCUMENT_TOKEN_TO_BE_REPLACED

Business Model Innovation opens up the opportunity to not only transform the value proposition, value architecture or revenue model of an organisation, it is a chance to rethink your human value systems and build businesses that customers love, employees’ value and investors are excited about. Often, particularly in turbulent times, cultural innovation is an imperative for management.

END_OF_DOCUMENT_TOKEN_TO_BE_REPLACED

Thanks to the business model canvas people are enthusiastic to build new business models and find business model innovations, but often they get lost in technocratic details. They just see building blocks but they forget the overal logic every great business needs.

END_OF_DOCUMENT_TOKEN_TO_BE_REPLACED 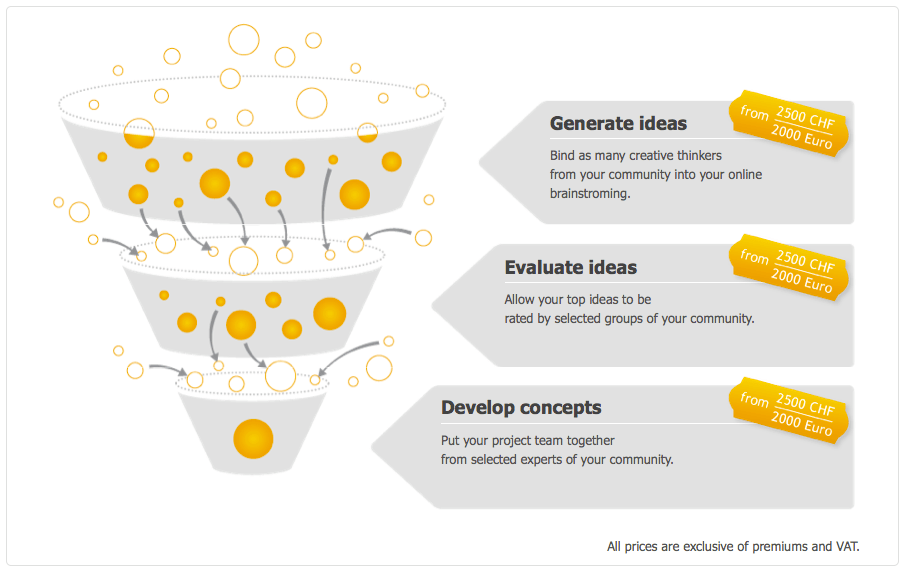 Open innovation is a big trend today in innovation management. Where are its strengths and limitations? A discussion with Atizo.

Today, I had a long chat with Isabel Steiner and Sabine Hofer from Atizo, an entrepreneurial platform for open innovation. Atizo is a platform where companies can post a question to a crowd to get more and better solutions. This is called open innovation since you are not looking inside your own firm for ideas but to a broader spectrum of people. Some call it crowd sourcing for ideas.

END_OF_DOCUMENT_TOKEN_TO_BE_REPLACED

Thomas Middelhoff was the CEO of the now insolvent German retail conglomerate Arcandor formerly known as KarstadtQuelle. Thomas Middelhoff has a good sense for timing. He left Arcandor in March 2009 just 3 months before the company had to file for bankrupcy in June. What made his stint at Arcandor so remarkable was not that he turned around the business of Arcandor but his ability to benefit personally from his position at Arcandor.

I am following the Arcandor business case for a while and I have written about the failure to innovate its business model in the past. So a recent  article of Süddeutsche on Arcandor grabed my attention.

The German daily Süddeutsche Zeitung reports (in German) that Middelhoff is by far better of than his former employer Arcandor and its employees that have lost their jobs. Süddeutsche Zeitung cites a confidential report of the auditors from Deloitte that acted on behalf of the German Federal Financial Supervisory Authority (BaFin).

END_OF_DOCUMENT_TOKEN_TO_BE_REPLACED

The big news in Switzerland is that an informant, crook or thief – whatever you like to call him depends from your standpoint – has offered the German authorities data from 1,500 German customers of Swiss Banks that have allegedly dodged taxes. Last year, another informant stole data on 3,000 French bank clients from the HSBC branch in Switzerland and sold it to the French authorities. And in 2008, Germany already purchased data on German customers of the Liechtenstein Bank LGT. The LGT case cost the German government several million Euro but they received a far higher pay-back on its investment form all the taxes and fines that the busted tax evaders had to pay.

END_OF_DOCUMENT_TOKEN_TO_BE_REPLACED

In the discussion on business model innovation an important point is missing: the culture in which the business is conducted. A business is all about people “creating” customers.