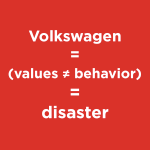 The deed is actually not the worst. The worst is that the huge gap between what the management of Volkswagen promised to be their values (which the public loved and believed) and the actual behavior.

The gap and the lost trust in their value proposition is the long-term damage and probably the death sentence to one of Volkswagen’s core technologies, the Diesel, in America. That is real damage, more than any fine, any short term dive in the market value.

Not your stated values in business model are important but the reality. And in reality, your behavior really communicates the entrenched values of your firm. Don’t create a perception gap.

And that is the key take-away. Get your behavior aligned to what you promise. It’s a walk on the tightrope. Don’t overpromise. Don’t build up a brand image which is an illusion.

Having all elements and building blocks of a business model aligned in reality is art but it makes the difference between an ordinary firm and great, sustainable firm!

Hopefully, Volkswagen will get its behavior aligned with its promised values again and their action really shows their true values they promised before.

It’s still a great company – with a huge moral and business issues to cope with.

4 thoughts on “We “totally screwed up”: Values and Behaviors in Volkswagen business model”