Diversity in teams helps to overcome mental models that frame and impedes fresh thinking. The solving of a case study gives an interesting example who diversity helps.

I gave recently a lecture on business model innovation for managers of a large German corporation. During the session they had to prepare a case study on Bosch Power Tools.

Bosch Power Tools faced at the beginning of the Millennium a crisis. China entered the market, trade and no-brands gained markets share, Bosch’s share decreased, the market stagnated and the business was loss making. So the division faced the choice of ‘fix it, sell it, or close it‘.

So was the status quo. It was up to the students to find a solution to the dire situation. We had two teams. Each had 30 min time to prepare the case.

The 1st team gave a classical presentation of introducing a budget line, cost-cutting activities and higher marketing spending. At the beginning I was disappointed about my teaching skills since the course was all about business model innovation and not about classic strategy. They presented a typical MOTS or more-of-the-same. More and better tools to the classical customer segment of men and power DIYlers.

The 2nd team wanted to expand to new customers that previously did not use power tools like women and soft DIYlers. They wanted to get away from the pure male marketing and put more priority on the use and usability of the tools than on the technical specifications that are so typical for the traditional power tool industry.

Bosch IXO for the IKEA Generation 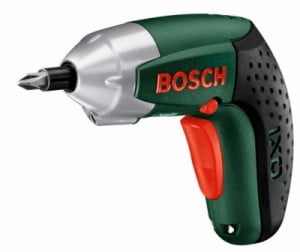 After the presentation of the teams I showed how Bosch had reacted. Bosch introduced the Bosch IXO, a small, well designed and handy new Li-Ion screwdriver that was designed for the IKEA generation of soft DIYlers. It was the first power tool that women liked to buy and use. The tool is so small that it replaces the screwdriver in the kitchen drawer. So far Bosch has sold 8 million units and the IXO is the bestselling power tool ever. The Bosch Power Tool division is today’s uncontested market leader and highly profitable.

As said, I was a bit disappointed at first about the 1st team but the learning for whole group was much bigger through their “wrong” solution. The whole team saw very quickly how they had been trapped by their mental model. They had used the market figures that showed that the budget segment was growing and therefore they wanted to enter this segment of the market with a budget line. Good reasoning but no escape from the heavy competition. One guy from the team even had an IXO at home and later told very enthusiastically about his little helper.  He was a bit confused that he did not see the solution even it was so close to him.

What was the difference between the two teams? In one team there was just one woman of total four. In the other two woman or half of the team. Big guess: Which team did find the solution with the soft DIYlers especially with/for women?

Well, right: It was the team with the highest diversity. In this small sample it shows that just one person from the other sex does not help. She had the idea but it was difficult for her to find acceptance in her team. In the second team, the solution came kind of natural to them.

So the interesting question is: How did Bosch come up with the idea? Well, it was a young female product manger that proposed the idea. So diversity is not only important in solving case studies but also in reality. So why don’t we do more.

6 thoughts on “Diversity and Mental Models”